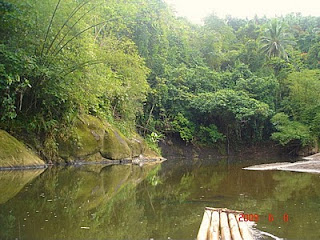 There was a time when the early settlers by the Jal-o regarded the river with a sense of foreboding. While it served as the main thoroughfare, their public baths and laundry pond, the river held many mysteries kept hidden among its lush mangroves and adjoining swamps and tributaries. Rumors and reports of actual sightings of monstrous amphibians wading its waters had been told in every household. The authorities had warned the villagers to stay out of the water especially at nighttime.
Of those crocodiles, Maeocong was regarded as the dominant bull--the king of the Jae-o. He was long as a boroto (local banca) and heavier than an adult carabao. It was said that he was more deadly if paired with his favorite mate, Pingan Nonay. Together, they wreck terror along the Anao and Bag-ot swamps.
For a time, the settlers tolerated their fear. They lived their lives by the Jal-o with that ominous awareness that they were not the masters of the river. But such fears had hounded them even in their dreams. Then came the news that a prominent couples from the poblacion was attacked by the dreaded creatures while on their way home from Batang. "Si Alo Feliciano hay ilo eot a! Si Alo Feliciano hay ilo eot a!" (Carlos Feliciano is now orphan!) came the report.
Alo Feliciano was the eldest son of Mariano and Maria Bebing Feliciano, Capitan of the poblacion of the newly established pueblo of Balete (the 33rd in the Provincia de Capiz). His father was tasked to collect taxes from among the landowners (leaseholders) and remit the same to the authorities in Batang once in a month. The Jal-o was the most convenient route as horseback riding through the Cabugao trail was punishing. The occasion was grabbed as opportunity by his mother to buy household provisions which were seldom sold in Balete. On their way home as their baroto passed along the Anao swamps, a couple of crocodiles attacked their wooden craft. That fateful incident had caused their lives.
Yet, it made the villagers confront their fear and take the bull by its horn--in this case--to take Maeocong and Pingan Nonay by their tails. The death of their Capitan and his wife had awaken in the Baleten-ons their innate courage to do something. Organizing themselves into teams, they hunt down the notorious couples right in their abode, cut down their heads and displayed it for weeks in front of the public market. "Bukon eon it hari si Maeocong sa Jae-o! Bukon eon it siga ro buaya sa Balete!"(Maeocong is no longer chieftain of the Jal-o! The crocodile is no longer the Lord of Balete!) , thus proclaimed by the Baleten-ons.
Posted by restlessheart at 6:03 PM

Welcome to My Blog

restlessheart
Sitting frenetically, doing a lot of things; the rain failed to come and yet Balete remains sturdy and strong